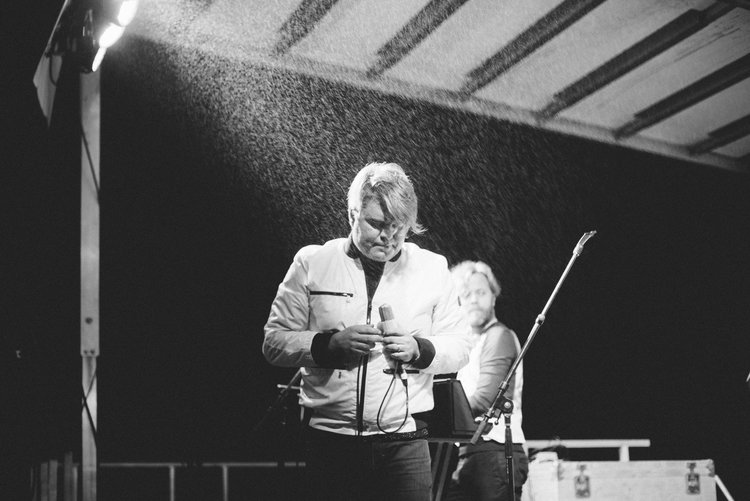 There are many people close to us that we are not currently able to touch.

There are so many touching stories of people supporting their neighbours, nurses, and community through COVID-19.

These songs have gone through countless touch-ups.

Touch is a language of love.

Touching is the new project from Winnipeg musician, studio engineer and festival producer Michael Falk. Over the past 5 years, in between producing the TD Winnipeg International Jazz Festival, SpaceLand, and Current Festival, he was also cooped up in his studio working on new songs.

Having worked up a wealth of new material with bassist/synthesist Alasdair Dunlop (Sweet Alibi), the pair are now shepherding this series of colourful, evocative songs into the world. They’ve added cinematographer Tyler Funk and acclaimed actress Ali Tataryn (Lovesick), forming a unique collaborative team shooting 10 thematic music videos (safely!) while under quarantine, and releasing them week by week. Together, they will be grouped as an album called Isolation Blues.

While so much of the music industry has sadly had to shut down, Michael realized that the material he was working demonstrated many parallels with the experiences of so many others during this collective isolation, so he and Alasdair determined to push these 10 songs to the finish line and began making plans with Tyler and Ali for a series of videos with a broad narrative arc for the lead character.

Since Touching has thus far been a studio project and hasn’t lost tours or gigs to the Coronavirus, it would feel weird to show up in the world again without also trying to help out peers who have lost so much this spring. 50% of all proceeds from Isolation Blues are being donated to Unison Benevolent Fund to assist their efforts to support musicians during this extremely challenging time.

There was a time when Michael’s old band Les Jupes seemed primed to make the leap from appendix also-ran to international artist of note. In their review of 2015’s Some Kind Of Family, Exclaim called Les Jupes “Canada’s next great band” a week before they announced their dissolution. Not everything goes to plan.

And so here we are. A new group of musicians and filmmakers, working together in the quest for a little bit of magic. To hold the mirror up to humanity with an inspired DIY creative work that champions the range of experiences and emotions we are all going through during this COVID quarantine. Alone. Isolated. Disconnected. Struggling with mental health. Evaluating who and what is most meaningful in our lives. And imagining, with hope, how our lives can be different on the other side.

Now more than ever, Unison’s emergency relief assistance is going to be a critical safety-net for members of our industry deeply affected by the virus. Please support us by making a contribution if you are able. Spotify is matching all donations made at www.unisonfund.ca/donations/spotify up to a collective total of $10 million USD across a handful of charities.